What Should I Know About Encryption?

You have probably heard the term “encryption

” used in several contexts and associated with different words. Generally, encryption refers to the mathematical process of making a message unreadable except to a person who has the key

” it into readable form.

Throughout history, people have used encryption to send messages to each other that (hopefully) couldn’t be read by anyone besides the intended recipient. Today, we have computers that are capable of performing encryption for us. Digital encryption technology has expanded beyond simple secret messages; today, you can use encryption for more elaborate purposes, for example, to verify the author of messages.

Encryption is the best technology we have to protect information from bad actors, governments, and service providers, and it has developed to the point that it is virtually impossible to break—when used correctly.

In this guide, we’ll look at two major ways encryption is applied: to scramble data

at rest and data in transit.

Data “at rest” is data that is stored somewhere: on a mobile device, laptop, server, or external hard drive, for example. When data is at rest, it is not moving from one place to another.

or another authentication method. On a mobile device or laptop, this usually looks just like a typical device lock screen, requiring a passcode, passphrase, or thumbprint. However, locking your device (i.e., requiring a password

to “unlock” your device) does not always mean that full-disk encryption is enabled.

Be sure to check how your operating system

since the device itself is not encrypted. Some systems still store unencrypted plaintext on RAM, even when you are using full-disk encryption. RAM is temporary storage, which means that shortly after your device is powered down the memory typically can't be read, but a sophisticated adversary

could attempt a cold boot attack and conceivably retrieve the RAM contents.

Full-disk encryption can protect your devices from people who have physical access to them. This is useful if you want to protect your data from roommates, coworkers or employers, school officials, family members, partners, police officers, or other law enforcement officials. It also protects the data on your devices if they are stolen or lost, like if you accidentally leave your phone on a bus or at a restaurant.

There are additional ways to encrypt

data at rest. One option, known as “file encryption,” encrypts only specific, individual files on a computer or other storage device. Another option is “drive encryption” (also known as “disk encryption”): this encrypts all of the data on a specific storage area on a device.

On Surveillance Self-Defense, we’ve written a couple guides for enabling encryption on your devices. Although you can find in-depth descriptions of encryption at rest options online (and here on SSD!), be aware that these options change frequently and instructions can become outdated quickly.

Data “in transit” is information that is moving over a network from one place to another. When you send a message on a messaging app, for example, that message moves from your device, to the app company’s servers, to your recipient’s device. Another example is web browsing: when you go to a website, the data from that webpage travels from the website’s servers to your browser.

Some popular apps offer features that seem to protect messages, such as disappearing messages. However, just because a communication (like a chat or message) can feel secure, doesn’t mean that it actually is secure. Computers passing along your message may be able to look at the contents of your message.

(TLS), protects messages as they travel from your device to the app’s servers and from the app’s servers to your recipient’s device. In the middle, your messaging service provider—or the website you are browsing, or the app you are using—can see unencrypted copies of your messages. Because your messages can be seen by (and are often stored on) company servers, they may be vulnerable to law enforcement requests or leaking if the company’s servers are compromised.

is an example of transport-layer encryption that we encounter frequently on the web. It provides more security than unencrypted HTTP. Why? Because the servers of the HTTPS website you are browsing can see the data you enter while on their site (for example, messages, searches, credit card numbers, and logins) however this information is unreadable to eavesdroppers on the network.

If someone is spying on the network and trying to see what websites users are visiting, an HTTP connection offers no protection. An HTTPS connection, on the other hand, hides which specific page on a website you navigate to—that is, everything “after the slash.” For example, if you are using HTTPS to connect to “https://ssd.eff.org/en/module/what-encryption” an eavesdropper can only see “https://ssd.eff.org”.

The web is in the middle of a large shift to using HTTPS for all webpages. This is because HTTP lacks any meaningful security, and HTTPS is secure by default. Webpages that come to you over HTTP are vulnerable to eavesdropping, content injection, cookie stealing, login and password stealing, targeted censorship, and other problems.

We recommend using EFF’s browser extension HTTPS Everywhere to receive the greatest amount of protection with HTTPS. HTTPS Everywhere ensures that if a website we know about offers HTTPS as well as HTTP, you’ll always be using the secure HTTPS version of the site.

Just because a service uses HTTPS does not mean that the service necessarily protects the privacy of its users visiting its website. For example, an HTTPS-protected site may still use tracking cookies

) is another example of transport-layer encryption. Without a VPN, your traffic travels over your Internet service provider’s (ISP’s) connection. With a VPN, your traffic still travels over your ISP’s connection, but it will be encrypted between you and your VPN provider. If someone is spying on your local network and trying to see what websites you’re visiting, they will be able to see that you’re connected to a VPN, but not able to see what websites you are ultimately visiting. Your ISP can detect who your VPN provider is.

For further advice on choosing a VPN that’s right for you, read SSD’s guide on VPNs.

End-to-end encryption protects messages in transit all the way from sender to receiver. It ensures that information is turned into a secret message by its original sender (the first “end”) and decoded only by its final recipient (the second “end”). No one, including the app you are using, can “listen in” and eavesdrop on your activity.

Accessing end-to-end encrypted messages in an app on your device actually means that the app company itself can’t read them. This is a core characteristic of good encryption: even the people who design and deploy it cannot themselves break it.

On Surveillance Self-Defense, we offer guides for using end-to-end encryption tools in our Communicating With Others guide. 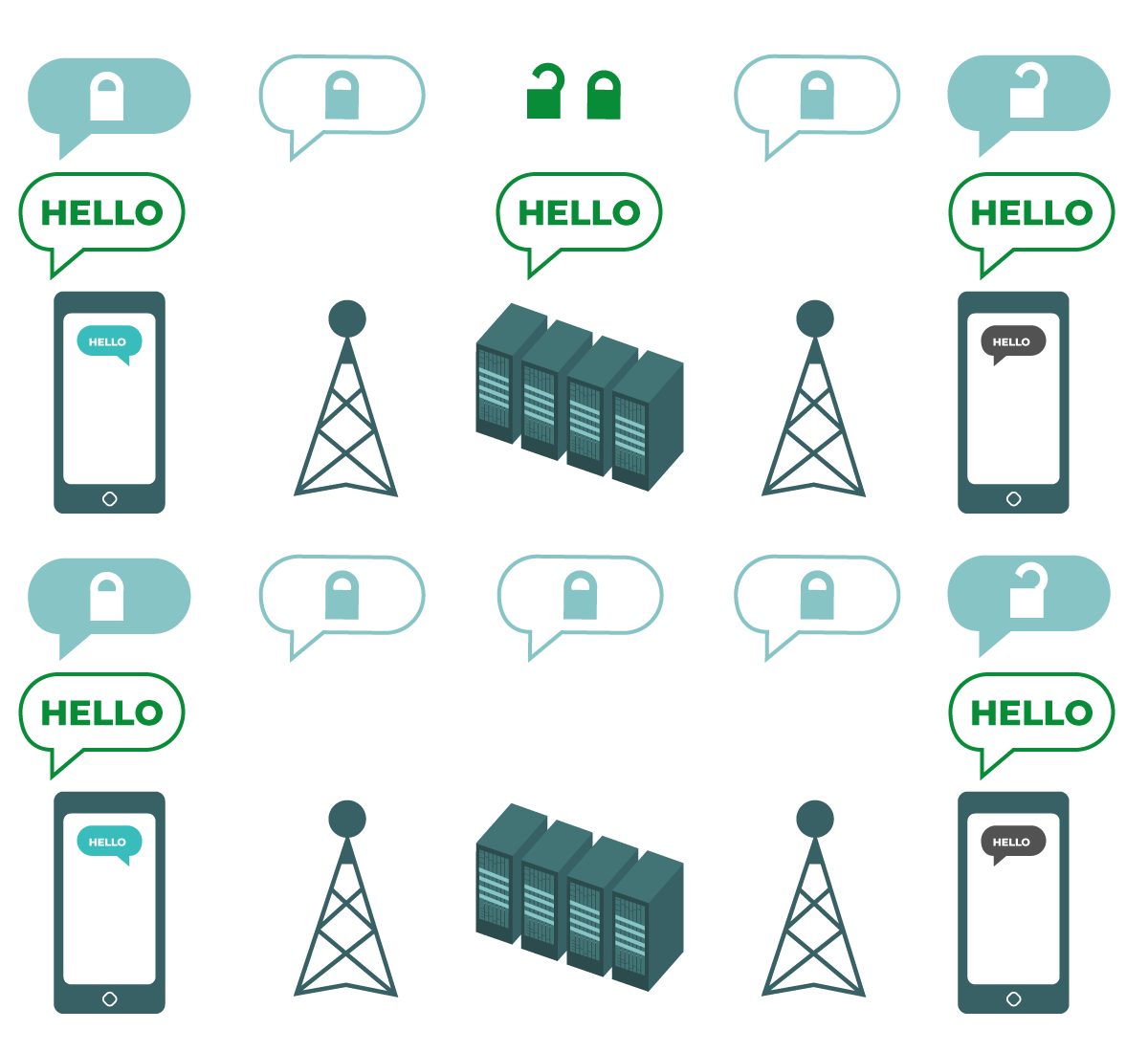 Important questions to ask to decide whether you need transport-layer encryption or end-to-end encryption are: Do you trust the app or service you are using? Do you trust its technical infrastructure? How about its policies to protect against law enforcement requests?

We created the animation below to demonstrate how end-to-end and transport-layer encryption work for data in transit. On the left is an end-to-end encryption chat tool (a chat box using the Off-the-Record

). On the right, is a transport-layer encryption chat box (encrypted through the Google Hangouts’ website use of HTTPS).

In the GIF, the primary user types a message in the Google Hangouts chat box:

“Hi! This is not end-to-end encrypted. Google can see our conversation.”

This user also has an Off-the-Record (OTR) chat box open and enables the “private conversation” setting. On the OTR chat box, the descriptive text says:

Simultaneously, in the Google Hangouts chat box, gibberish ciphertext is being exchanged, showing that the users are now on the Off-the-Record (OTR) end-to-end encryption protocol. Every message passed through OTR chat box also appears in the Google Hangouts chat box, however, instead of being readable, it appears as gibberish. The other user types a message in the OTR client:

The other user sends a smiley emoji.

What Encryption In Transit Does Not Do anchor link

If you automatically store backups of encrypted conversations to “the cloud” (other computers), be mindful to check that your backups are also encrypted. This ensures that your conversations are not only encrypted in transit, but also at rest. 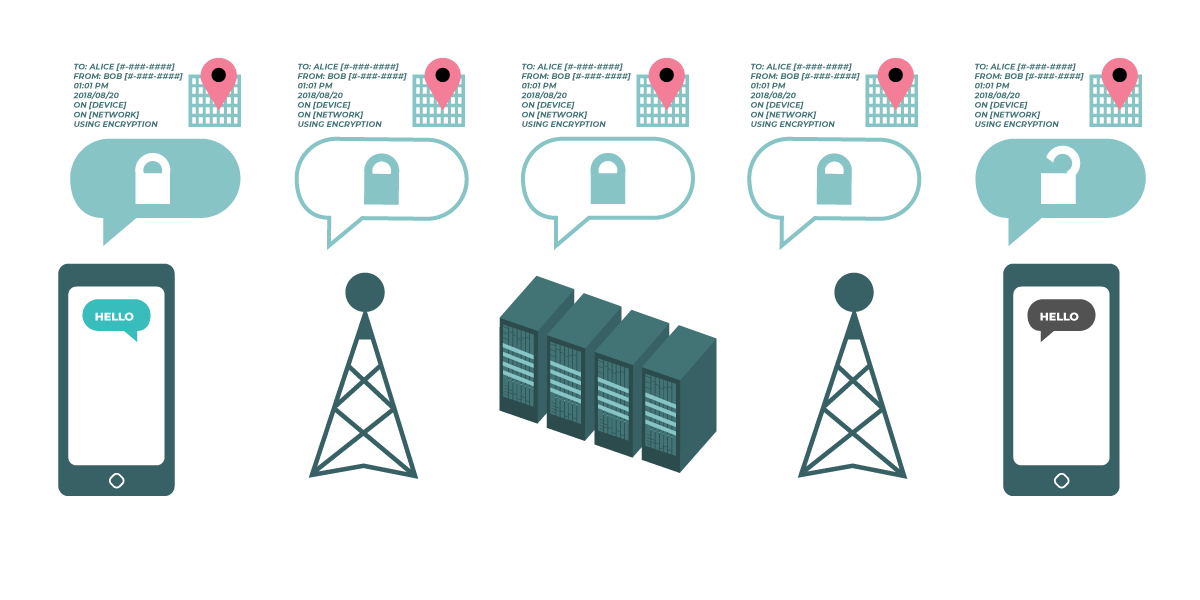 If you encrypt data in transit, it will protect the content of your communications, but will not encrypt metadata. For example, you can use encryption to scramble the messages between you and your friend into gibberish, but it does not hide:

by only using encryption during sensitive times or for specific activities. Why? If you only use encryption sometimes, it could tie your metadata

to important dates and times. Therefore, use encryption as much as possible, even for mundane activities.

Also, if you’re the only person using encryption on a network, this metadata may be seen as suspicious. This is why many encryption enthusiasts encourage everyone to use encrypted tools whenever they are able: to normalize the use of encryption for people who really need it.

Putting It All Together anchor link 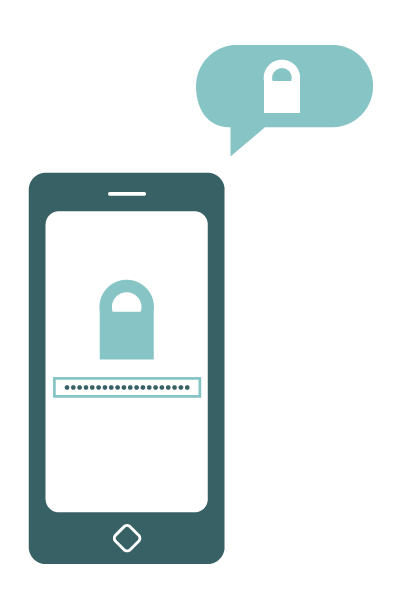 Together, encrypting both data in transit and at rest will offer you more comprehensive security than using just one or the other. This is what information security experts call “defense in depth.” By utilizing multiple methods to defend your data, you can achieve a deeper level of protection.

Conversely, if you send end-to-end encrypted messages (encrypting your data in transit) on an unencrypted device (not encrypting your data at rest), those messages will be impermeable to snooping and eavesdropping on the network. If someone gets physical access to your mobile device, however, they will be able to access and read the messages.

With these examples in mind, encrypting your data both while it’s in transit on the network and while it’s at rest on your device is ideal for protecting yourself from a wider range of potential risks.

For a deeper dive on how to use encryption, please continue onto our guide Key Concepts in Encryption.