How to: Encrypt Your iPhone

If you have an iPhone 3GS or later, an iPod touch 3rd generation or later, or any iPad, you can protect the contents of your device using encryption

. That means that if someone gets physical access to your device, they will also need your passcode to decrypt

what's stored on it, including contacts, instant messages or texts, call logs, and email.

their contents by default, with various levels of protection. But to protect against someone obtaining your data

by physically stealing your device, you need to tie that encryption to a passphrase

or code that only you know. See below for instructions on how to do this.

If your device is running iOS 8, disable Simple Passcode to create a code that is longer than 4 digits. With the release of iOS 9, Apple defaulted to a 6-digit passcode.

If you choose a passcode that's all-numeric, you will get a numeric keypad when you need to unlock your phone, which may be easier than typing a set of letters and symbols on a tiny virtual keyboard. However, we suggest choosing a passcode that's alphanumeric, and longer than 6 characters because it's simply harder to crack, even if Apple's hardware is designed to slow down password

Once you've set a passcode, scroll down to the bottom of the Passcode settings page. You should see a message that says “Data protection is enabled.” This means that the device's encryption is now tied to your passcode, and that most data on your phone will need that code to unlock it. 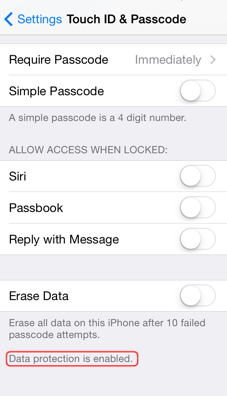 Here are some other iOS features you should think about using if you're dealing with private data: anchor link

The above information applies only to iOS devices running versions of iOS prior to 8.0.

REMEMBER: While Apple will be unable to extract data directly off a phone, if the device is set to sync with iCloud, or backup to a computer, much of the same data will indeed be accessible to law enforcement. Under most circumstances, iOS encryption is only effective when a device has been fully powered down (or freshly-rebooted, without being unlocked). Some attackers might be able to take valuable data from your device's memory when it's turned on. (They might even be able to take the data when it has just been turned off). Keep this in mind and, if possible, try to make sure your device is powered off (or rebooted and not unlocked) if you believe it's likely to be seized or stolen. At the time this guide was published, a few companies claimed they were able to break the passcodes of iPhones for law enforcement, but details surrounding these claims are unclear.